Session 016: An Escort to Kathmandu, Peshawar & Nepal, Northwest Frontier, May 1840

At the end of a relaxing week in Peshawar in which all of the party managed to repair their 'tired' wardrobes, the 400 mercenaries are ready to go. Having had the personal attention of every milliner, seamstress, tailor and silk merchant in Peshawar for an entire week Lady Macbeth's luggage takes an additional elephant to carry. Todgers has spent the week painting and writing in the gardens and is seemingly working on a book about local shrines and temples. In between these artisitic endeavors he is to be found in close discussion about rail-roads with Paolo!

The party decide to travel with them to ensure the vital trade of information happens to plan, and a great procession snakes its way back across the Punjab, via Meerut and into Nepal. During this time, Todgers takes some opportunities to visit temples and shrines along the route in which he is especially interested, and is joined by the rest of the party for some of these excursions. Wallace especially joins in his temple visits, although he is more interested in the Yogis he finds there than the temple structure!

As they approach the rendezvous point Wallace and Gladstone scout ahead, and Wallace is approached by a pair of locals at the agreed meeting point, one of whom transpires to be LeiutenantJamesOutram. He is pleased to see the party have returned successfully with the mercenaries and rejoins Wallace to ensure that they are not released into the MarhariniLakshmi 's control until after the receipt and verification of the information regarding the location of Dost Mohammed.

The 'army' arrives at the rendezvous location and duly sets up camp, with Hamilton clearly displaying the red scarf that the Marharini gave them. That evening MarhariniLakshmi makes her entrance, managing somehow to make it seem grand even with just two guards and a rather tired horse. Greeting everyone in order of precidece but slighting Hamilton she is met with enthusiasm by PaoloDiAvitabile and a great feast is enjoyed by all. During the feast, while the Marharini dances and every red-bloodied man is distracted, the Marharini's maid takes Lady Elsbeth aside and quickly confirms the 'cost' of the troops and indicates that the information might not be available for another week or so. Lady Elsbeth decides to pass this information on at breakfast - once the men folk can concentrate.

A long night ensues, with the Marharini's maid taking a shine to Gladstone and discussing the various troops here, at Peshawar and available to John Company at some length, a subject about which Gladstone can ramble incoherently for hours. The lass gamely sounds interested for over three hours over night-caps in her tent ....

Wallace having been 'encouraged' when greeted by the Marharini earlier leaves the feast slightly early and uses some of the new mantras that the Yogi have taught him to prepare himself. Later that night he slips out of his tent and makes his way to the Marharini's tent, slipping in through the back as she says goodbye to Paolo leaving the Italian firmly at the door! After a brief need to introduce himself to the guards in the Marharini's tent he renews his close personal relationship with her, noting in the course of the night's activities that she too is a practitioner of the 'yogic' arts, and a better one than him.

Todgers spies on the goings on within the camp, taking great pleasure in the haste with which the various parties head back to their tent when Lady E wakes the whole party up early with hot cups of tea and jolly-hockey sticks enthusiasm.

The party elect to move the procession slowly towards Kathmandu to show willing, while ensuring that the Maharini is not given control of the troops until the information is made available. During this time Hamilton ensures that EVERY opportunity to visit temples and shrines of his particular interest is taken. http://www.cbmphoto.co.uk/photos/LAQ34.jpg+left This slows the progress to a crawl, but does allow Wallace a week of intense study during the day and practice through the night. During the journey, Paolo continues to shower Lady E with gifts of flowers and attention, much to Wallace’s' frustration. He responds in his typically English restrained way by becoming introverted and quiet and leaving occasional anonymous gifts of single flowers.

As they approach Kathmandu and a particularly large shrine the Marharini approaches Gladstone and indicates that she has information regarding some of he opponents planning to ambush some of the processions scouts. She also 'mentions' that one of the difficulties in handing over her more sensitive information is that it might be attributed to her. Gladstone acts...

Sending the usual few scouts out he waits half an hour and he and Paolo lead a well armed foray hurrying after them. Very shortly they hear gunshot from the village near the shrine and charge to rescue their scouts. It transpired that the scouts were attacked in a small square, and the few survivors are holed-up in a hut on the edge of the square surrounded by about a dozen gunmen. Gladstone leads half of the troop to the right and Paolo the other half to the left,with orders to capture a few alive. In fierce but short fighting Gladstone is shot with an arrow in the back ( !no one suspects Wallace is starting to blame Gladstone for his failure to win Elsbeth!) and some opportunistic locals nearly unseat and kill him, only stopped by his superb horsemanship and casual disregard for personal safety. Lady Macbeth, on hearing gunshot leaps on her horse, grabs whatever firearms she has available and leads a charge of helpers from the camp into the village. She arrived just as Paolo finishes mopping up and the two of them help Gladstone into a hut where Paolo's medic attends him.

As matters settle down and the rest of the army moves into the village, Paolo indicates that lady Macbeth might wish to avail herself of the fine hunting up in the hills. Hamilton "accompanies" her.

Once the 'Lady' is out of earshot the medic proceeds loudly to torture the three captives in the hut next door to Gladstone. Their cries attract Wallace who instantly demands that the medic stop his foul practice and rushes to see Paolo. Paolo explains that he is following Hamitons requests and Wallace rushes to find him, the three party members return to the village and confront an opiate sodden Gladstone who explains the need for the 'cover story'. Everyone agrees to the demands of Wallace and Elsbeth that this stops immediately and Hamilton (secretly) orders the death of the three captives after they have been 'interviewed' in private by Gladstone.

That evening the Marharini gives a scrap of paper to Wallace with three words on, describing a house in a remote village where [Dost Mohammed] is known to shelter. He eats the note and passes the information on discretely to LeiutenantJamesOutram, who is very pleased.

The following day the troops are formally handed over to the control of the Marharini. They all make their farewells and with a small escort the party head back to Lucknow, en-route to Hamilton's estates in Bengal.

Aside... Wallace is invited to stay with the Marharini in Kathmandu, but declines saying that there is a 'one eyed idol' he has to go and see... 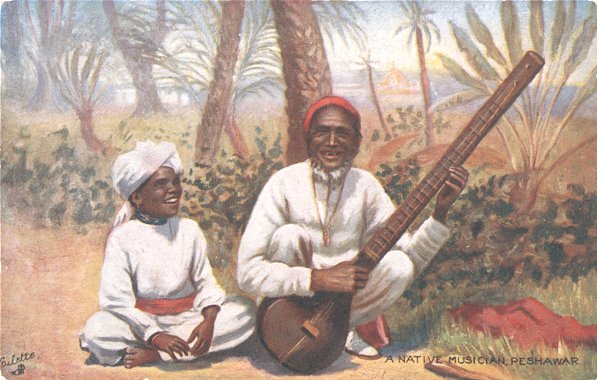