Elsbeth: Wallace better turn up soon or Hamilton will take us all of to Blighty without you

Wallace: I'll get there. They're not going to remove the entire flotilla.

Elsbeth: No but if the boat we're on has left the next might be a long wait. Mind you I don't think Elspeth will believe that you went to England without her. Much more likely that you've found trouble and are need of a new shirt!

Wallace: I'll get back for the wedding... even if I have to swim!

Wallace: ...sorry, I should say I'll be back in time for the murderous shooting engagement party...

Elsbeth: Not sure if this is Elspeth's mother or Elspeth in 40 years time - picture 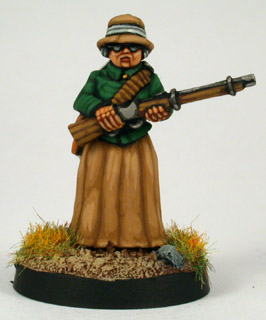 Elsbeth: It'd be pretty special swimming to get from Eygpt to Scotland by Hogmanay!

Wallace: Oh... My... Ghawd... No wonder they always say look at the mother-in-law before you marry. <gulp!>

Wallace: Perhaps if I steal her glasses she won't be able to see where to 'accidentally' shoot?

Elsbeth: Maybe its her Granny?

Elsbeth: Heres an indication of exactly how far we have strayed from normal ettiqutte [Link]

Wallace: "and, making a frank statement of his _affairs_ and prospects, formally ask his consent to their marriage." What!?! I have to name all my mistresses whilst asking for her hand in marriage? No wonder so many fiance's are shot dead!

Elsbeth: Depends if Mama's present. Papa's hearing isn't what it was - will probably think you're talking about your horses 'fine fillies, eh, what!"

Wallace: "The engagement is one of the most charming experiences of a girl's life, and she is wise not to let it be cut too short. The length of an engagement must depend mostly upon outward circumstances. It is only a journey, of which the end must come sooner or later." - So battling our way up the Red Sea, looting Egypt, and starting a war is "a most charming experience"? I hate to think what the honeymoon will involve.

Wallace: "The mother of the groom should invite both the family of the expectant bride and herself to a dinner as soon as possible after the formal announcement of the engagement. The two families should meet and make friendships at once."  -  Now this might be a little tricky. What is the social convention about raising dead parents as zombies and hosting a dinner party with the undead? Hmm. Considering they were eaten by apes, I may have to host dinner with a ouiji board instead. Since we'd be inviting dead family members, perhaps some of the Macbeth family skeletons could attend too?

Elsbeth: "No young lady must visit the family of her fiance, unless he has a mother to receive her" I think they mean living mother, but I'm not sure.

Elsbeth: "Nor is she allowed to go to the theatre alone with him, or to travel under his escort, to stop at the same hotel, or to relax one of those rigid rules which a severe chaperon would enforce." Well at least we didn't go to the theatre....

Wallace: ...We've done just about everything else. Why, you've even seen me with my shirt off, countless times!

Elsbeth: Let's not mention the shirts to mama